We didn’t office with Burt Harris for long, what with Chuck and Bob, the two writers, taking over our designated space at 5:00pm. Wally and Maxine found a place over on Brighton Way. It was upstairs on the second floor and had a balcony. My office, which also served as the storeroom, was across the hall next to the ladies room and overlooking the alley.

So what if she didn’t type, who cared?

My associates had their own secretaries, who shared the large reception area. My secretarial work was handled by the receptionist who didn’t type let alone take dictation. But I didn’t care; she was gorgeous. He name was Nancy Monet, and she was every bit as beautiful and as wholesome as any prospective Toni model who walked through our door. Nancy’s story is not easy to tell. On the other hand, it’s a slice of Hollywood showbiz reality that existed at the time. 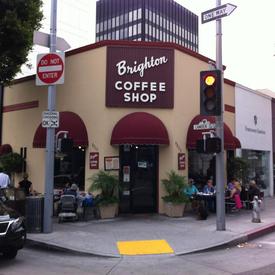 Nancy’s routine every morning was to go downstairs around 10:00, check the mail and pick up coffee on the corner at the Brighton Coffee Shop.  As happens, a very prominent show business lawyer named Greg Bautzer officed nearby, and just happened to take his regular coffee break at that coffee shop at 10:00 AM. 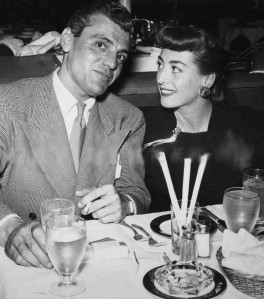 Greg Bautzer was a tall handsome man-about-town. He represented such movie stars as Ginger Rogers, Ingrid Bergman and Joan Crawford, to name a few of his showbiz clients. He was engaged, so they say, to Crawford and Dorothy Lamour, neither of whom made it to the alter with Bautzer. He did marry actress Dana Wynter which predictably ended in divorce.

My brother-in-law Alex Koper knew Bautzer when they were in the army stationed on some island in the South Pacific. According to Alex, all the G.I.s hated the guy. As the story goes there was one woman, a Navy nurse, on that island with 3,000 men, and according to my brother-in-law, the “bastard married her”.

Nancy was easy prey. Coffee led to lunch at the Brown Derby or the Luau. Of course there was the chauffeured limousine, dinners at Chasin’s, La Rue or Romanoff’s and expensive gifts from Magnin’s and Saks Fifth Avenue.

Nancy started using make-up and having her hair done. Bautzer sent her over to Elizabeth Arden for the works. His limousine and chauffer were at her service whenever she needed a ride. She learned to drink and started smoking.

The rest of us in the office just watched and wondered, except Maxine, who had grown up and lived her entire life in this Hollywood scene. She knew Bautzer and his reputation and probably could have predicted the inevitable.

The affair began to unwind: Whereas Nancy had always been the first one in the office every morning, she was finding it more difficult to make it to work at 9:00am. The “chance” meetings at the coffee shop were not happening, and Bautzer left it to Nancy to originate the phone calls. He began sending his chauffer to pick her up and bring her up to his home in Bel Air. The restaurant, night club and other courting activities were fading away and so was our Nancy. The youthful verve began to diminish. The old sparkle was forced. The affair had ended, and she was just another woman in the long line of Bautzer casualties.

Six months after joining the agency, Nancy gave notice. There were hugs all around, and she returned to her home in Terre Haute, Indiana. I received one letter. It sounded upbeat. She had enrolled at Indiana State University and was studying to be an actress… What else?

Not that you’re interested, but there was a revealing story about the exploits of the infamous Greg Bautzer in the July 12, 2013 issue of the LA Times in our “Begged and Borrowed” segment.

OPEN CHAPTER 6: OUT IN THE COLD